The 3-Day Professional Training Workshop for 31 of journalism studies Students from Abdul Wali Khan University Mardan and other universities of Khyber Pakhtunkhwa, Gilgit-Baltistan and Islamabad concluded.

The workshop was organized by Pakistan Peace Collective (PPC), a research & communication project of the Ministry of Information & Broadcasting (M/O, I&B). It may be recalled that project works on the peace-building campaigns to counter the trends of violent extremism in Pakistan and simultaneously organised training workshops on capacity building of media students for developing creative media content.

Dr Firdous Ashiq Awan, Special Assistant to Prime Minister on Information and Broadcasting, attended the concluding session of the training workshop. While addressing the participants, she emphasized upon the need for peace and harmony in society to achieve a higher benchmark of progress and development. She advised the participants to strive for achieving the higher objectives of life and play their due role in this regard, when they enter into practical life. She later distributed certificates among the participants of the workshop.

Mian Shabbir Anwer, CEO PPC, while welcoming the chief guest lauded her keen interest in various activities of the project (PPC). He also appreciated the support extended by the faculties of the universities in selection and nomination of students for the said training. He expressed confidence that the participants would utilize the lessons learnt during the training workshop and contribute towards the peace building efforts as responsible communicators particularly while covering issues of violent extremism.

The training workshop unwrapped two days earlier with a session on the Narratives, Impact & Critical Analysis of Violent Extremism in Pakistan, delivered by Mr. Khursheed Nadeem, a religious scholar. For the session based on Paigham e Pakistan, Dr Aftab Ahmed Sangra delivered his views. Dr Aftab is Head of Department, Comparative Studies of World Religions and Secretary, Council of Islamic Research Institute.\

Paigham e Pakistan, he said, is a social contract validated by all the political parties as well as ulema and masha’ikh of all schools of thoughts. Students were also given a chance to interact with the resilient and brave citizen of Pakistan; Mr. Inayat Ullah Khan Incharge Bomb Disposal Unit D.I. Khan KPK Police; he narrated his own real time experiences in combating terrorist activities in Pakistan.

Other sessions of training workshop included Media’s role in Countering Violent Extremism (CVE), the social and psychological impact of Conflict Reporting in Pakistan as well as Critical Thinking: while Communicating on Conflict in Pakistan. The training ended with course modules of Video Production Techniques included research scripting, interview and camera techniques, grammar of sound, lightning and editing. In the practical exercises, participants also produced media products through smartphones based on the training themes.

Kamran Butt from National College of Arts Lahore, Tahir Imran Mian from BBC, Usman Zafar and Faizan Gul from PPC also delivered their respective lectures during the training. The participants attending the training workshop belonged to various universities from provinces of KPK, GB and federal capital. 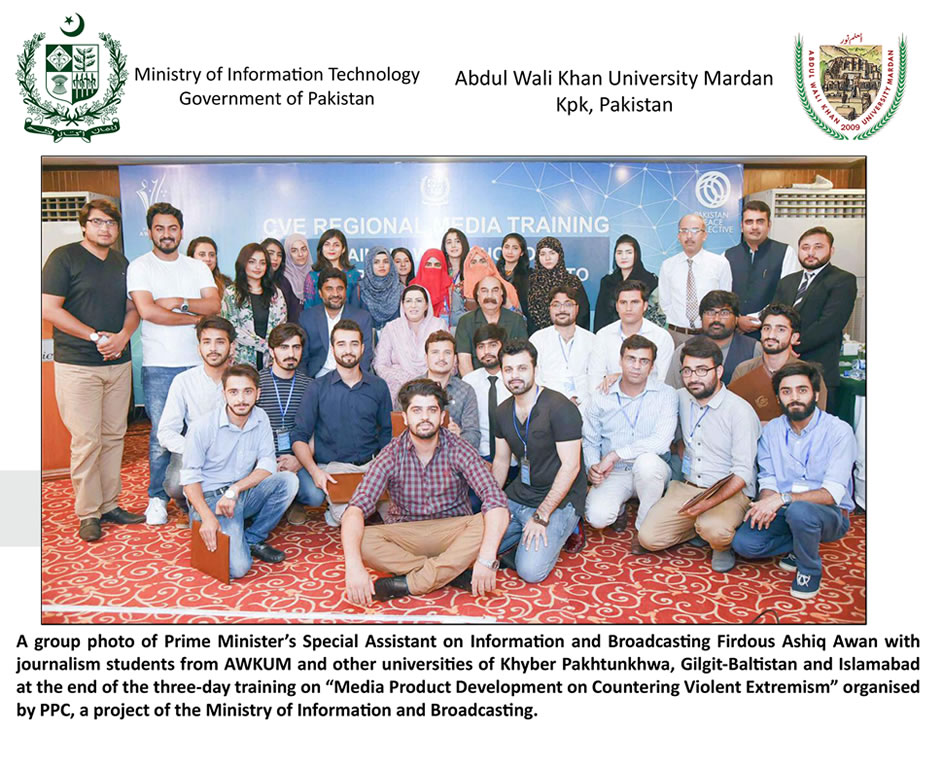